This is my first post following a long winter hiatus. A backlog of partially edited posts left unpublished has finally overwhelmed me. Eventually, the urge to write overpowers the fear of writing poorly—something too personal, too provocative, uninformed, or worse, just bland. I’m pleased to return to the log once more. 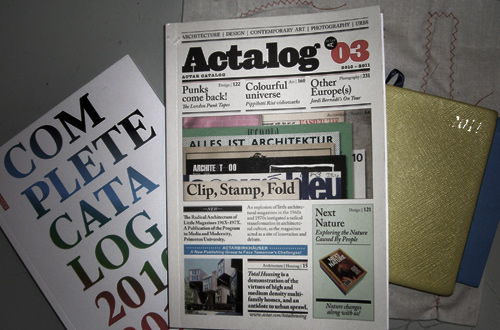 Today  in my mailbox I discovered two publishing catalogs, one from Actar (the “Actalog”) and another from Birkhäuser. These are among the best publishers of books on architecture and design. (Other top imprints include Princeton Architectural Press, The MIT Press, Rizzoli, Phaidon, Taschen, and NAi.) Both catalogs show color illustrations of covers and spreads as well as reviews for each title. Birkhäuser begins with essays from their graphic designers about their work process, mentioning Slanted Magazine’s TypoLyrics—The Sound of Fonts, a section in which new fonts are showcased using pop/rock/hip hop lyrics. It’s now a whole book. I like the zen question behind the subtitle, “the sounds of fonts.” What does type sound like when no one’s there to read it?

Flipping through these catalogs, I curiously became filled with trepidation. I consume books voraciously, but paradoxically, I’m a slow reader. (Fortunately, monographs are mostly pictures.) I saw many books I’d like to own, or at least hold in my hands and read, and the more titles I saw, the more nervous I became. There’s a part of me which still carries a bizarre phobia I developed around age 16. This was about the age when, in typically egotistical teenaged fashion, I first felt I really understood the world, that I really knew all I needed to know in life. Yet this belief, one which gave me a sense of power and stability, was constantly challenged. More and more frequently I would hear about a critical event that passed my notice, find an important author I’d never read in a subject I thought myself fluent, or stumble across a whole branch of knowledge I knew nothing about. I feared being ignorant, or more truthfully, being seen as ignorant. The more I learned or tried to learn, the more crisp became the realization that there exists a vast body of truth I’ll never know. There’s simply too much for one person to know in one lifetime. This fact was hardly comforting. Every time I passed a book store I was reminded of my inability—not to be omniscient—but to be what I identified as worldly, as cosmopolitan.  When I saw arrays of art and design books in particular, the sensation of futility became crushing. I started to avoid book stores all together; I essentially feared them.

The local bookstore I most frequented growing up was the Strand, a gigantic used book store that in my youth advertised “8 miles of books.” (They’ve since tripled their retail space and now boast of 18.) I’d go there with my mother, who’d buy novels in French or sell auction catalogs. It was dark and dusty back then, dimly lit, like a basement news room. The closer book store was St. Mark’s Books, which has an excellent art and architecture section as well as self-published poetry and quirky magazines in the back. For a time, I refused to go inside it. I’d get a slice of pizza while my parents browsed. I’m not sure how I came to feel at home in book stores once again. I suppose I’ve developed a level of acceptance with the limits of the human mind, of my mind in particular, and the limits of my energy. I still seek to be cosmopolitan and informed, but narrowing one’s interests into a specialty is a common feature of the modern world, so I no longer feel innately inadequate. Still, every now and then, I wish I could have a memory that was more encyclopedic.

On my book list from Actar is Clip, Stamp, Fold: The Radical Architecture of Little Magazines, 196X-197X, edited by Beatriz Colomina of Princeton fame. That was a very optimistic time for architecture, utopian; and who doesn’t love quirky little pamphlets in bright colors featuring walking buildings?