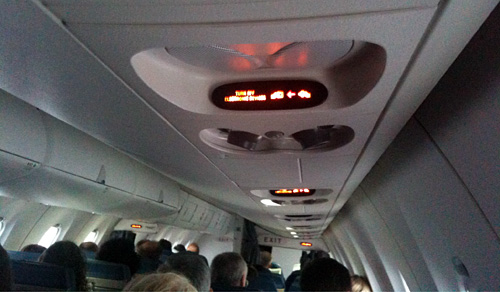 It’s always a delight to discover the sublime hidden in the pedestrian.

I caught an episode of Planet Earth the other night on Discovery HD theater. Episode 4: Caves. You can watch it in 10 minute chunks on You Tube, but take note: it’s the version with Richard Attenborough’s narration, not Sigourney Weaver’s, whose voice is more soothing. The episode takes the viewer through spectacular caves around the world, some adorned with gorgeous crystals and others endowed with severe environments populated by bizarre fauna. The largest of these caves is in the United States, Lechugilla Cave, in New Mexico. It measures 126 miles long and was discovered recently, in 1986. A mini-documentary at the end of the episode tells viewers it took two years for the film crew to get permission to enter the cave and travel as far along it as they did. Part of the reason is that the crystals in Lechugilla are extremely fragile, crystals made of gypsum… which brings me to dry wall.

Dry wall is what most walls are made of, in America. Is dry wall dry? Actually no, it isn’t. The name “dry wall” refers to the dryness of plaster board in contrast to wet plaster laid by hand. Early dry wall is just plaster encased in paper; current dry wall includes gypsum in the plaster matrix. Gypsum, or calcium sulfate dihydrate (CaSO4·2H2O), contains two water molecules bound up by the mineral crystallization process. In a fire, this water is released. By incorporating gypsum into plaster, dry wall is in fact designed to be more wet. I happen not to be a fan of dry wall, or “gypsum board.” It’s a low quality material that easily turns moldy. I never would have thought that its primary ingredient could be so lovely.

Behold! the Chandelier Ballroom in Lechugilla cave, covered in so-called “alabaster” formations of the mineral gypsum. Here is a gypsum flower, and an aragonite tree. When I finally build my dream house, I want a room with towers like these. All these links go to the same website, www.cavepics.com, a home page for the photography of Peter and Ann Bosted. Fantastic. END_OF_DOCUMENT_TOKEN_TO_BE_REPLACED

Architect Turner Brooks came to speak in our lecture series last week. He was surprised to find out his work had been discussed that morning in my theory class, as part of a section on critical regionalism. He told me that he’s decidedly un-theoretically focused (though his brilliant wife, the architect and historian Eeva-Liisa Pelkonen, certainly is). In response to the—shock I think it was—of being included in a theory class, he mentioned in his lecture that his favorite piece of reflective writing on architecture is Gaston Bachelard’s Poetics of Space, along with Franz Kakfa’s The Burrow, the latter of which he read with his undergraduate students, delighting in the increasingly crazed story arc of the neurotic auto-entomber. He showed slides of Goodnight Moon, one of the most movingly illustrated children’s books of all time, to talk about the relationship between the safe, small, cozy space of the home and the untamed wild of the infinite outside the window. Being able to speak to both simultaneously seems to be one of his aims, and I believe he’s succeeded. 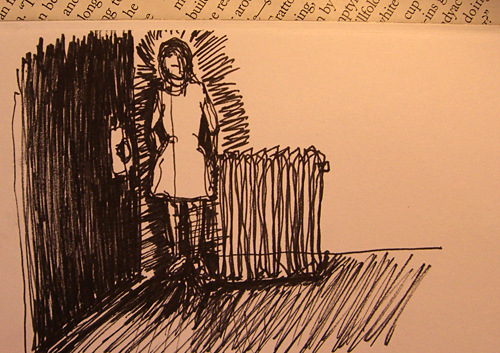 One of the most pleasing aspects of Brooks’s architecture is his inclination towards intimacy. Intimacy in architecture, for me, is built space that’s radically personal. An archetypal example is the “ancestral reliquary” Brooks built into a house in Vermont. It’s a cabinet placed within the wall above the bed in the master bedroom filled with trinkets of little monetary value, Brooks says, but great personal significance. He showed a slide of three children enacting a play in which a ghost flies up to rest in the ancestral reliquary. Secret passageways fall into the same category, particularly if child-sized. Another example is this staircase built by Tom Luckey for his children, which becomes a slide.

Childhood is a particularly magical time for the creation of personal spatial archetypes. The “hidden space” is one of mine. In the drawing above, I try to depict the gap between our front door and the radiator in our hallway, a hidden, dariel-sized space I’d run to after getting out of the elevator where I’d wait for someone to unlock the door. The purpose was to be the first person inside after the door had barely cracked open, but looking back it was also nice to find a space that fit just me, and no other member of the family.

There have been several architectural monographs with the word “everyday” in the title. The one that springs to mind is Architecture of the Everyday by Deborah Burke and Steven Harris. Another,  Architecture isn’t just for special occasions by Julie Eizenberg and Hank Koning, implies “everyday” without saying it. There are multiple possible meanings and intentions coded in “everyday” as used in this context. It could refer to high culture vs low culture, or to learning from everyday surroundings. It could be a way to posit one’s work as assessable and anti-elitist in a discipline where elitism is firmly entrenched,  expressing the belief that Architecture (capital “A”) is for everyone and ought to be enjoyed daily. Through the lens of praxis it refers to phenomenology, which emphasizes the holistic, unbreakable, ontological link between the self and the everyday world.

My use of “everyday” is narrowly focused on unexpected sights that inspire. The picture below was taken in my kitchen. It’s the swoop of two string pulls from a set of blinds which gracefully folded into the shape of a dolphin entirely accidentally. Appreciating sights like this adds texture to one’s creative life. 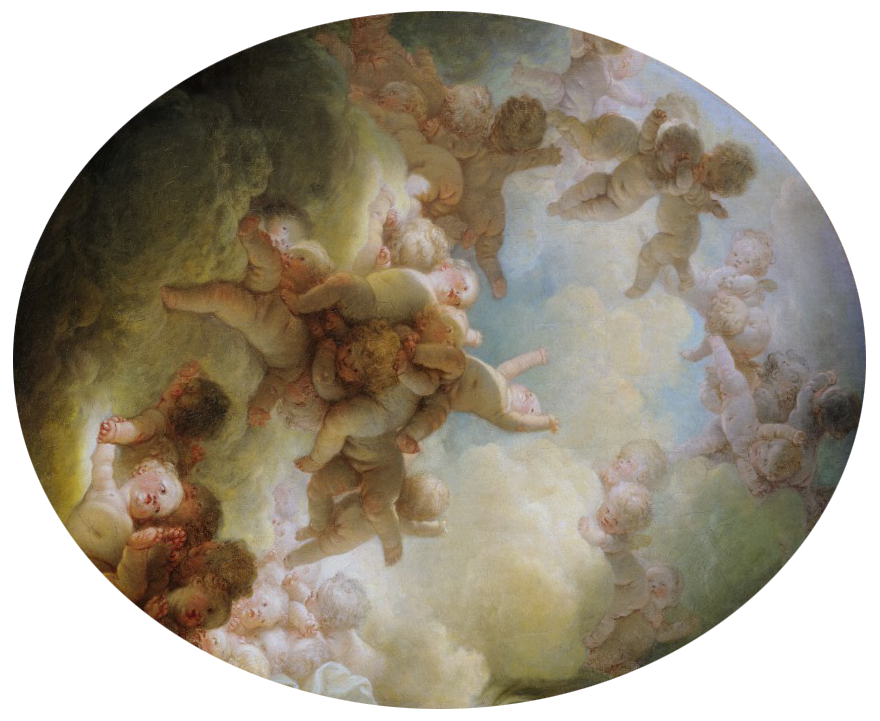 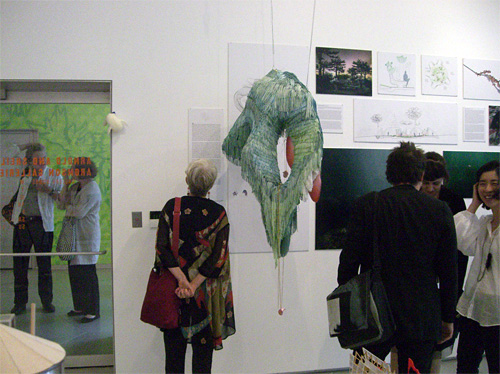 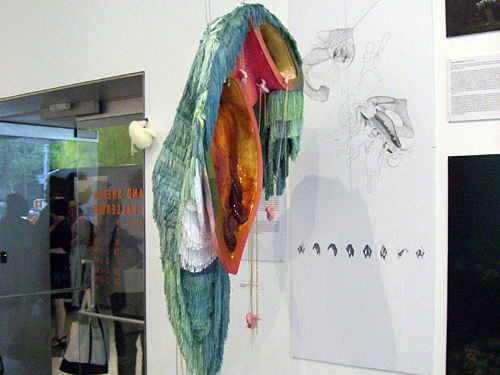 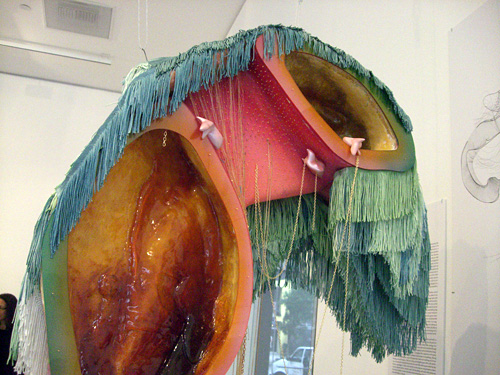 I recently had the pleasure of attending the National Conference on the Beginning Design Student [NCBDS] hosted by UNC-Charlotte. I had a ball meeting new friends and learning new pedagogical techniques. Just prior to the opening night’s keynote by Simon Unwin, participants had a chance to wander around Mario Botta’s new Bechtler Museum of Modern Art. Included in my wandering was the ladies’ room, where I took some photos of the frosted glass bathroom stall: 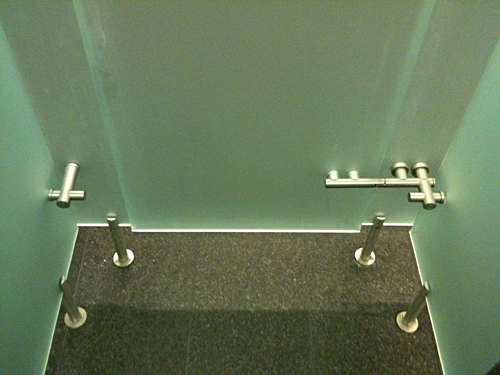 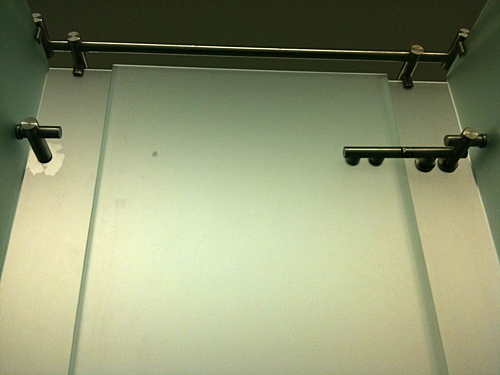 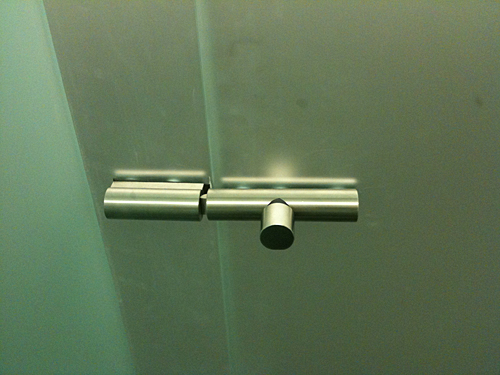 As you can see, there is nowhere in this 8 foot high stall where a prying eye might see you. In your average bathroom stall, however, there are gaps all over the place, like between the door and the partition on both sides. Two of my lady students, one from Calcutta and the other from Tehran, asked me during a chance rendez-vous in the University bathroom why these gaps exist. I couldn’t explain. I’ve heard the theory that the purpose of these gaps is for authority figures to make sure only one person occupies a single stall at a single time. Clearly, if this is true, it’s only true in the United States. Such thoughts remind me to look around for tiny webcams whenever I enter a public bathroom. Point 1 for voyeurism.