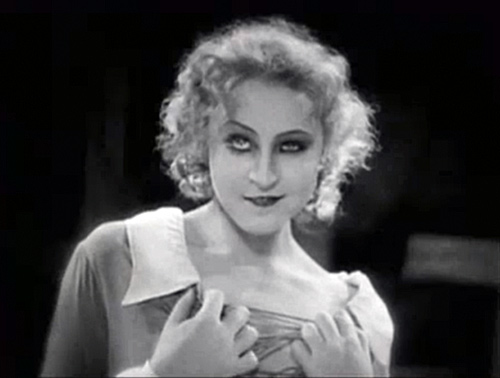 We aired Fritz Lang’s Metropolis as part of our lecture series last week, and only two people showed up, which is a shame. I first saw it in college, perhaps in a class. I know I went out and rented it and made my two closest friends watch it with me over and over. I loved the imagery, the sets and painted backdrops in shades constructivist, futurist, and expressionist. The treatment of the main female character, however, left a lot to be desired. Maria embodies the traditional virgin-or-whore dichotomy, enforcing the notion that a woman is either one or the other; nothing in between. To be precise, Maria is the saint and her robot double, the false Maria, is the sinner. My two friends and I promised to start a band called The False Marias, but school got in the way. I like to think we’d sound like the Yeah Yeah Yeahs.

Given a choice between the roles of good girl and bad girl, I’d choose bad girl every time. Actress Brigette Helm must have had so much more fun as false Maria than true. Just look at her delicious expression! Remember the TV show Jem and the Holograms? I liked the Misfits. Jem is particularly distressing to look back on. Why would a rich secret rock star be ruled by blind devotion to some jock preppy guy? 1980’s, I don’t miss you!

The next film in the lecture series is Jia Zhang Ke’s 24 City. I hope we have a better turnout.