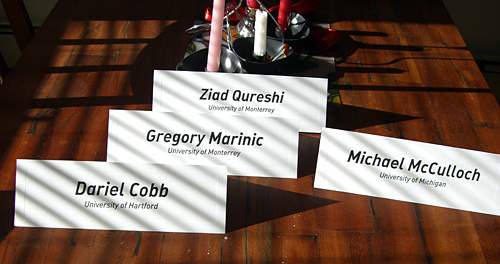 As mentioned in my last post, there were four speakers in the Northeast Fall Conference session at the ACSA national conference in Montréal, the session I moderated on Sunday morning. Here’s an image of our placards—all except Onezieme’s, who like me wanted to keep his placard. They make one feel rather official, in contrast to the first-name-only name tags ACSA handed out, which were rather casual. The speakers presented in the following order:

I’m going to discuss them in reverse order. These three papers represent not only a range of views about urban culture, but the speakers themselves typify three different ways of being an architect. Onezieme Mouton is a design-build practitioner who invested his own funds in the renovation of two small buildings in Abbeville, LA, his home town. They border Madalen Square, part of Abbeville’s downtown historic district. The renovation of a third empty building, Frank’s Theater, has become his personal mission. Mouton established a non-for-profit, the Allumé Society, in order to raise funds, rally community support, and enable critical government partnerships. His paper explores the role non-profit organizations have to play in bridging the gap between designing and building, and between educational, community, and governmental resources. Onezieme is rare in his combination of earnestness and personal sacrifice. He reminds me a bit of Emily Pilloton, who moved to rural North Carolina to teach high school students about the transformative power of design. Pilloton, who was a TED presenter in 2010, would probably like the term Onezieme is trying out to describe community-oriented design as a combination practice of social justice and economic engine: “Quality-of-Life-itecture.”

Michael McCulloch, who goes by Mick, is an architect and educator currently getting his PhD at the University of Michigan. He’s a Detroit native, and his paper explores the role of race, class, and religion in the residential divisions of suburban Detroit, specifically around the Ford factory. It’s really quite remarkable to read how tightly Ford managed to control the social habits of its workers, sending minders into their homes to see if they were wasting their wages on drinking and carousing (if they were, wage bonuses would be docked). This was all part of trying maintaining the neighborhood as an upper middle class Anglican community, even against the influx of diverse workers with distinctly different social values and cultural practices. Mick is an architect like me, one who wants to pull back the curtain on architecture’s past and reveal whatever truths have heretofore been ignored—like the immense role racism and other prejudice has played in shaping the physical environment. It seems that most social sciences have confronted this issue head on. I feel architecture, a profession which is itself still far from diverse, hasn’t.

At some point during the first presentation I wrote down, “suburbia is the physical manifestation of imagined cultural desire.” This seems particularly true in the case of Monterrey, Mexico. Gregory Marinic and Ziad Qureshi had a lot to say about the different iterations of this desire, expressed through a combination of literal architectural translations, transpositions, and outright copying. They showed Monterrey’s miniature version of the ice rink in Houston’s Galleria (a mall), a micro-zócalo modeled on Mexico City, moderne apartment condos, and highrises that imitate recent work in Shanghai. Monterrey, I learned, has a distinct cultural and ethnic identity within Mexico given its dramatic landscape, its proximity to the United States, its wealth, and a strong historical German influence (similar to nations in South America like Argentina and Chile). One’s just as likely to hear techno music on the street as anything from La Raza. Gregory and Ziad (/zee-ahd/) use case studies as the primary vehicle of their scholarship, which seems very productive. They gave two talks as ACSA national, and I hope their collaboration will continue even though Gregory is moving to the faculty at the University of Houston.

Thanks to all of them for a great session.