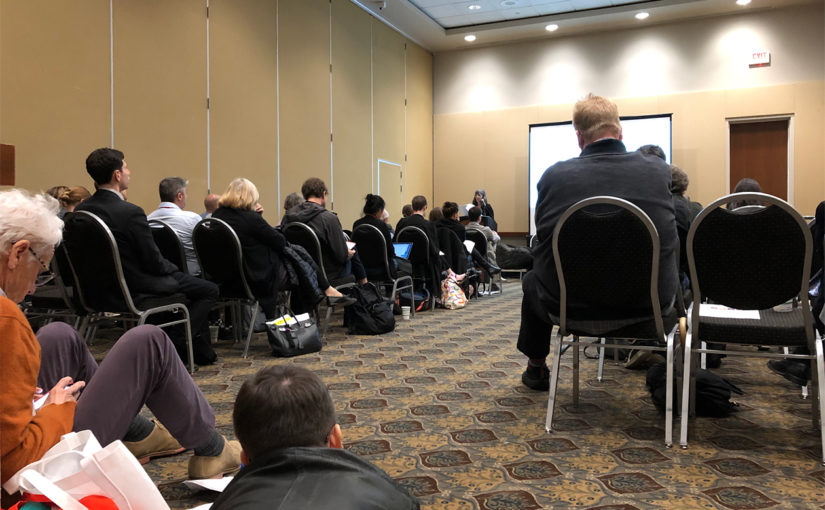 This year, the Society of Architectural Historians held their annual conference in Providence, Rhode Island. As Providence is only a commuter train ride away from Boston, I decided to finally attend. It was one of the more interesting conferences I’ve attended in terms of presentation content. A stand out moment among many was a “round table” presentation that took place during the Friday lunch hour titled, Pluralizing Histories of the Built Environment. It was convened by Itohan Osayimwese, who teaches at Brown, and Charles Davis II, from SUNY Buffalo. In the SAH conference brochure description, the session promises to ask:

Where are the archives for minorities and people of color to be found today? And what practical techniques and strategies have historians employed to pluralize histories of the built environment?

This was essentially a panel session, with each of four presenters discussing their work and their methodological approaches to understudied or traditionally undervalued material. I found Anooradha Siddiqi’s comments regarding the study of refugee camps particularly fascinating — “subjects structurally marginalized within the context of their emergence.” (That is, the moment one becomes a refugee, one is simultaneously marginalized.) Siddiqi, who teaches at Columbia, does not have an architecture history background, and this allows her I think to move through her archive in a more nimble way than an art history training generally permits. I’m thankful that MIT does not adhere to the period or place boundaries that traditional programs follow, and encourages similar methodological dexterity.

My only complaint about the session was it’s “round table” nature. Because it was not a series of discussions curated by each individual table, but rather a presentation taking place at the front of the room, the forced round table seating was extremely awkward. I suppose someone took the term “round table” too seriously?

The image at the top of this post is a regular panel presentation room, with chairs set up in regressive rows. Sadly, this was the aesthetic nature of the Rhode Island Conference Center (RICC), a massive, hulking, pomo shed. It’s enormous; several city blocks long.

One panel, Agora to WaterFire: Landscape Histories of the Public Realm, decided to pull all its chairs into a circle. The room, however, was rather narrow, so the circle became an oval, and then a mandorla, pinched at one end. I walked into this room during a presentation and realized, to my horror—as several colleagues from years’ past were sitting facing the door and thus facing me—that I was in the wrong room. I meant to attend a panel on African architecture across the hall titled, Transatlantic Encounters: Africa and the Americas (really about the Black Atlantic world more broadly). The doors to each conference room are heavy, metal, fire-rated doors with noisy push bars, and it was the bane of the entire conference to hear them open and slam closed over and over again as attendees flitted from room to room. (Each paper presentation takes places at an exact time, so it’s possible to see your friend’s work on under-recognized designers in American Beaux-Arts practices, as I did, and then scoot out to catch another panel.) I tried to wait for the current speaker to finish, but I kept thinking of what I might be missing, and then just ducked out as rudely as I had entered.

I was really curious as to why no one—in an architecture history conference—commented on the incredible monument to late capitalism that is the RICC. 1 I can’t properly describe how incredibly large it is, except to say that during the SAH conference, several other events were taking place simultaneously, including a dance expo complete with changing rooms and full stage, and a sports paraphernalia marketing meeting. Even with these participants, there were still plenty of extra rooms unoccupied.

It was pretty great to walk down this long hall and discover a teenager in a full spangly, sparkly, ice dancer-like outfit practicing her tumbles and emotive gestures in the gathering space carved out for SAH guests. (I think she was trying to keep her routine hidden from the other dancers.)

The best thing about conferences, of course, is meeting new people and connecting with colleagues and friends. Dinners and happy hours are the best time for this. I was delighted to spend some quality time with some of my favorite people.